Legal Technology conferences  around the world have no shortage of networking events and cocktail receptions, however diversity and inclusivity are usually not the theme

Large scale industry events typically include a variety of cocktail parties and networking mixers; however they are typically held by associations or vendors with a focus on specific products, services, and sponsors. Event organizers regularly schedule networking mixers and receptions as part of their official programs, however those events typically follow a general “party” theme or focus on certain member categories and/or professional classes of delegates. This year on ILTACON19’s agenda, there were several official receptions, parties, and networking mixers based on many themes and functional specialties per usual.  But in addition, there was a group of diversity receptions geared toward international attendees, women, young professionals, and LGBTQ+ individuals.

Dawn Hudgins, Vice President of Events and Conferences at ILTA was attending an “events event” earlier this year and noticed there was an LGBTQ+ event on the agenda. Dawn realized she had never seen any type of LGBTQ+ focused events at any legal technology conference and thought it would be a great idea to consider adding one to the agenda of ILTACON19.  She brought the idea up to her colleagues and quickly got them on-board to host the first ever LGBTQ+ reception at their annual conference in Orlando.

Once the reception was added to the agenda, the event sponsorship opportunities were snatched up quickly.   Gayle O’Connor, Marketing Strategist for EDT Software noticed the event sponsorship was an option and discussed the opportunity with Jo Sherman, the CEO of this woman-owned business who just so happens to be a huge advocate for diversity.  Together, they quickly decided this was an event they wanted to sponsor and they signed up immediately. Gayle hopes to see more of these diversity opportunities in legal tech and stated EDT Software would be very interested in supporting more diversity events in the future.   Suzanne Koch, Director of Engagement Solutions at Fulcrum GT stated her organization was pleased to be a sponsor of the LGBTQ+ reception and they would also like to see more diversity events taking place within the legal technology world as they understand the importance of this community and are committed to continued support.

Dawn Hudgins had hoped to have at least 10 people in attendance at the reception and was thrilled when over 50 individuals showed up at the event.  According to Dawn, this event was perfectly aligned with one of ILTA’s core values for 2019; Diversity and Inclusivity, and the organization has created a Task Force to tackle diversity issues as well as to plan future events and meetups.  She hopes to see more diversity events within the legal tech community, and added they plan to double the duration of next years’ LGBTQ+ Reception at ILTACON20 by extending it to 2 hours in a larger space. 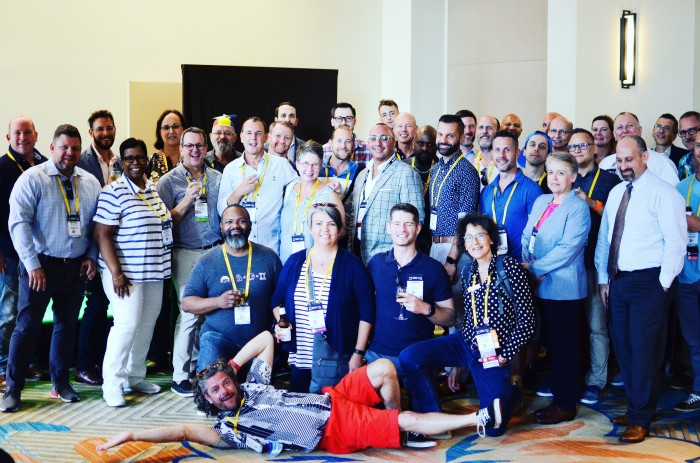